Alan Abramowitz has been named State Director of the Year by the National Court Appointed Special Advocate/Guardian Ad Litem (CASA/GAL) Association for Children. Abramowitz received the award at the organization’s virtual Awards of Excellence program on October 21, 2020. He is the executive director of the State of Florida Guardian ad Litem Program. Posted 11.3.20

Shelley G. Reynolds was presented a Florida Bar pro bono award at the Supreme Court of Florida on January 30. Reynolds has her own practice in Pensacola and also works with Legal Services of North Florida on domestic violence cases and child delinquency cases. Posted 1.30.20

Colonel Steven P. Hester retired from the U.S. Army Reserve after 30 years of service. In his civilian capacity, he remains with the Navy Office of General Counsel, and effective September 2019, he joined the Naval Information Warfare Center Atlantic in Charleston, South Carolina, where he serves as associate counsel (labor). Effective December 2019, Hester was certified as a Department of Navy alternative dispute resolution mediator. Posted 1.15.19

Stephen R. Senn began his term as the first vice president of The Florida Bar Foundation’s board of directors on July 1, 2019. He began serving on the board in 2012 and is currently the chair of the investment committee. Senn is a senior shareholder at Peterson & Myers, P.A. in Lakeland. He has a broad-based litigation practice, which includes appeals, complex litigation, employment disputes, and commercial and business litigation. Posted 7.30.19

Stephen R. Senn was recognized with The Florida Bar Foundation’s 2019 President's Award for Excellence for his steady and dependable leadership and his willingness to go above and beyond his duties to ensure seamless transitions. Senn is a senior shareholder at Peterson & Myers, P.A. in Lakeland. He has a broad-based litigation practice, which includes appeals, complex litigation, employment disputes, and commercial and business litigation. Posted 7.26.19

Stephen R. Senn is a 2018 recipient of The Florida Bar President’s Pro Bono Service Award. The award is presented to one lawyer in each of Florida’s 20 judicial circuits and one out-of-state lawyer. Senn is a senior shareholder at Peterson & Myers, P.A. in Lakeland. He has a broad-based litigation practice, which includes appeals, complex litigation, employment disputes, and commercial and business litigation. Posted 1.25.18 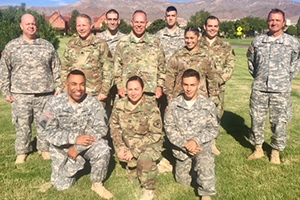 William D. Anderson is a yoga instructor at Journeys in Yoga in Tallahassee.

Submitted entry:
"Mr. Anderson never made partner. He has rocked every boat in which he ever sailed and bitten every hand that tried to feed him. His resume reads like a police blotter. In spite of this, or perhaps because of it, he is by far the happiest person he knows. He can be reached on his yoga mat, or atfightclubbuddha@gmail.com.”
Posted 12.7.17

Pablo Meles is now of counsel at Espinosa Martinez Law in Miami. The firm focuses in patent, trademark, copyright and other intellectual property litigation and prosecution. Posted 10.5.17