Kimberly J. Sisko-Ward passed away on September 3, 2022, at her home. Kim faithfully served the public in many ways during her career. Posted 9.20.22

Reynaldo Velazquez has joined nationwide employment law firm Jackson Lewis P.C. in Miami as a principal. Velazquez was previously with FordHarrison LLP, and he has more than 20 years of experience in all areas of labor and employment litigation. Velazquez works with claims management companies and employment practices liability insurance companies to defend employers against discrimination, harassment, and retaliation claims. He is a seasoned litigator who works with various industries including fire departments, hospice care facilities, and many other private and public sector entities. Posted 12.08.21

Marlon A. Hill is now of counsel at Weiss Serota Helfman Cole & Bierman in Miami. Hill specializes in the convergence of business and government. He represents local governments, businesses and entrepreneurs in business transactions, intellectual property and government matters concentrated in the hospitality, tourism, arts and entertainment, and technology sectors. He works with growth-oriented businesses in South Florida and the Caribbean, helping them navigate the structuring, launch and growth of their ventures, and advocates for them before state and local government entities. Posted 2.16.21

Adam Hasner has been named to the 2020 edition of The INFLUENCE 100: The Most Influential People in Florida Politics. Posted 10.28.20

Benjamin L. Crump has been named to the 2020 edition of The INFLUENCE 100: The Most Influential People in Florida Politics. Posted 10.28.20

Benjamin L. Crump has represented the families of George Floyd, Ahmaud Arbery and Breonna Taylor in the past months. He is also featured in The Washington Post's piece, "Ben Crump has Become the Go-to Attorney for Racial Justice: 'I Feel Like I’m Running Out of Time.'" He was recently introduced by the Rev. Al Sharpton as “Black America’s attorney general.” Crump's role in this movement stretches back more than a decade and includes the cases of Michael Brown and Tamir Rice, as well as Corey Jones, Pamela Turner, Botham Jean, Stephon Clark and others.  Posted 6.30.20

Jacqueline B. Steele was appointed to the Manatee County Court. Steele is currently partner at McConnaughhay, Coonrod, Pope, Weaver & Stern, P.A. She previously served as an assistant public defender in the 13th Judicial Circuit. Posted 6.19.20

Shannon Hartsfield co-authored a book entitled, “HIPAA: A Practical Guide to the Privacy and Security of Health Data, Second Edition,” through the ABA Health Law Section. Hartsfield is a partner at Holland & Knight in Tallahassee. She is a recognized expert on HIPPA, and her practice focuses on corporate compliance, particularly in the regulatory and data privacy areas. Posted 1.28.20

William R. Waters passed away on September 4, 2019. He practiced at Waters & Associates in Tallahassee. Posted 9.17.19

Diego “Woody” Rodriguez was named general counsel at Central Florida Expressway Authority (CFX), to commence on October 1, 2019. He will serve as an adviser to CFX’s Governing Board and executive staff, while also overseeing in-house and outside legal teams. Rodriguez currently serves in the same capacity with the Orange County School Board (2010-2019) and served in a similar role with the Orange County Supervisor of Elections Office (2000-2005). He has extensive experience in legal matters involving land use, construction and finance and is board certified in city, county and local government law. Posted 9.5.19

Shannon B. Hartsfield was named one of the 2020 Best Lawyers in America. She is a partner at Holland & Knight LLP, where she practices corporate compliance, particularly in the regulatory and data privacy areas. Posted 9.5.19

The Honorable T. K. Wetherell, II was confirmed to the United States District Court for the Northern District of Florida on July 10, 2019. Posted 7.30.19

Nicola A. Boothe-Perry was named interim dean of the Florida A&M University College of Law. She previously served as dean from January 2008 through June 2015. Posted 4.23.19

Marlon A. Hill is a mentor at the Brownsville Law Academy at Brownsville Middle School in Miami. His firm, Hamilton, Miller & Birthisel, LLP, was recognized by the American Bar Association (ABA) Public Education Division for their groundbreaking legal studies partnership program as Most Outstanding 2018 ABA Law Day Student Program Activity. In collaboration with other community partners and Miami Dade Public Schools, the firm successfully raised funds to design and renovate two classrooms into a mock courtroom. The mock courtroom was dedicated on May 29, 2018 in conjunction with Law Day. Hill is an experienced corporate, intellectual property and government transactions lawyer of more than 22 years. Posted 12.7.18

Tina Willis opened her own boutique auto accident and personal injury law firm, Tina Willis Law, in Orlando, after years of drafting motions and briefs behind the scenes for other personal injury and medical malpractice lawyers. She only accepts cases that involve injuries that are likely to need surgery or worse, such as catastrophic injuries or wrongful death. Since opening her practice, Willis has been recognized in the Top 10 Best Florida Lawyers by the American Institute of Legal Counsel and recognized in The National Trial Lawyers Top 100. She received the 10 Best Client Satisfaction Award from the American Institute of Personal Injury Attorneys, became a member of the Million Dollar Advocates Forum (fewer than 1% of attorneys nationwide are members), and earned a perfect 10 rating from Avvo, Inc. Willis can be reached at Tina Willis Law, 390 N. Orange Avenue, Suite 2300G, Orlando, Florida 32801 or by phone at (407) 803-2139. Posted 10.5.18

Raykel E. Tolson authored the novella, Undefiled, which will be released on August 31, 2018. Her professional experience includes roles as family and criminal attorney, pharmacist, professor, and workshop presenter. Posted 8.28.18

Jeanne M. Miller was elected to the Florida State University Alumni Association National Board of Directors. She began a three-year term on July 1, 2018. Miller serves as president and chief executive officer of the Jacksonville Civic Council. Posted 7.26.18 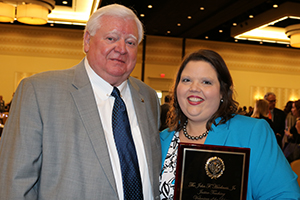 E. Ashley Hardee was named the Justice Teaching John F. Harkness, Jr. Volunteer of the Year at The Florida Bar Convention in Orlando. She is a senior trial court staff attorney in the Eighteenth Judicial Circuit. Posted 6.26.18

Benjamin L. Crump is the host of TV One's new show on wrongly convicted men and women, "Evidence of Innocence." The one-hour program chronicles four people arrested and jailed for crimes they didn't commit before being freed. Crump is the founding attorney of Ben Crump Law, PLLC in Tallahassee, where he practices civil rights law. Posted 6.11.18

The Honorable T.K. Wetherell, of the First District Court of Appeal, was nominated by President Donald Trump to serve as a district judge on the U.S. District Court for the Northern District of Florida. Posted 6.11.18

Marlon A. Hill was appointed to the board of directors of BMe Community, which "helps build caring and prosperous communities inspired by black men." Hill is a partner at Hamilton, Miller & Birthisel, LLP in their Miami office, where he practices in the areas of corporate law, intellectual property and government transactions. Posted 5.18.18

Brian A. Higgins passed away on December 6, 2017. He was a trailblazer as a criminal defense attorney at the Office of Criminal Conflict and Civil Regional Counsel for the First District Court of Appeal in Tallahassee. Posted 12.13.17

Edward L. Birk, a shareholder at Marks Gray, P.A. in Jacksonville, was recognized as one of the 2018 Best Lawyers in America. He also was selected as a 2017 Florida Super Lawyer. He practices in the areas of media law, municipal liability, E.R.I.S.A. benefits, employment, Fair Labor Standards Act and products liability. Posted 8.21.17

Benjamin L. Crump was inducted into the FSU Circle of Gold. He is launching Ben Crump Law, where he will focus on fighting social injustice. Offices will be located in Los Angeles, Washington, D.C. and Tallahassee. He was previously a partner at Parks and Crump, LLC in Tallahassee. Crump also appeared in an episode of the Fox live unscripted series, You The Jury in April. Posted 8.16.17

Daryl D. Parks will open a new independent law firm, Parks Law, in Tallahassee. The firm will focus on serious injury and death cases, medical malpractice and tobacco litigation. Parks was previously a partner at Parks and Crump, LLC in Tallahassee. Posted 7.27.17

Lisa D. Bernau is now the assistant to the vice president of finance and administration at the University of West Florida. Posted 7.5.17

Cynthia L. Hain passed away on April 28, 2017, after a year-long battle against pancreatic cancer. She served as assistant general counsel at the Florida Agency for Health Care Administration. Posted 5.1.17