Markenzy Lapointe has been confirmed as U.S. attorney for the Southern District of Florida and is the first Haitian American to hold this position! Posted 12.9.22

Juan C. Villaveces, of Shumaker, Loop & Kendrick, LLP, was included in the 2023 edition of The Best Lawyers in America in the area of Real Estate Law. Posted 10.4.22

Leron E. Rogers was named the Entertainment Attorney of the Year by the National Bar Association. A partner in the Entertainment & Sports Law Department at Fox Rothschild, Rogers is a broker of continued success for superstars, a game-changing litigator and a leader in the legal profession. He has negotiated millions of dollars in deals for some of the biggest names in music and entertainment, including Rick Ross, Kanye West, Coco Jones, Abou “Bu” Thiam and Druski, and has structured major agreements with companies such as Cookies, Rap Snacks, Jet Docs and Bumbu Rum. Posted 8.22.22

Leron E. Rogers has been named to Variety’s 2022 Legal Impact Report for the second consecutive year. The report highlights the top legal professionals in entertainment whose recent deals and litigation have transformed the industry landscape. Posted 5.12.22

Leron E. Rogers was named a 2022 Top Music Lawyer by Billboard magazine for the third consecutive year. The Billboard Top Music Lawyer award spotlights “the savviest legal counselors in the business" called upon to advise clients on the surging tide of catalog sales as well as IPOs, NFTs, Web3 and other new ventures in the metaverse. Posted 4.5.22

Sandra Upegui is now the general counsel of the Public Library of Science, a nonprofit, open access publisher empowering researchers to accelerate progress in science and medicine by leading a transformation in research communication. Posted 3.1.22

Earnest DeLoach, Jr., vice president - legal and compliance for the Southeast Division of Balfour Beatty Construction in Orlando, has been named co-lead of both the company's DEI Task Force and its African American Employee affinity group, NOBLE. DeLoach has also recently been a speaker on various panels, including the 2021 Texas Bar Association Construction Law Conference "Building Diversity and Demolishing Implicit Bias in the Construction Industry" and the Association of Corporate Counsel's "Disrupting the Silence - A Conversation about Asian Hate and Bias." For his work, DeLoach was recently named a 2021 Orlando Business Journal "Diversity in Business" Awardee. Posted 5.12.21

Leron E. Rogers was recently named a 2021 Top Music Lawyer by Billboard magazine and was also featured in Variety’s 2021 Legal Impact Report. The Billboard Top Music Lawyer award spotlights “the best legal minds” on the front lines of the music industry’s litigation battles and deals, and the Variety Legal Impact Report features top legal professionals in entertainment whose recent deals and litigation have changed the landscape of the industry. Posted 4.21.21

Alicia Caridi has joined the Tampa office of Marshall Dennehey Warner Coleman & Goggin. She relocated to Tampa from the firm’s Mt. Laurel, N.J. office. Caridi is a shareholder and is co-chair of Marshall Dennehey's Amusements, Sports and Recreation Liability Practice Group, representing waterparks, theme parks, roller skating rinks, trampoline and climbing wall attractions, and other entities when claims are brought against them. She is also experienced in the defense of general casualty matters. Posted 9.9.20

Earnest A. DeLoach, Jr. served as a panelist on the Association of Corporate Counsel-Central Florida Chapter’s “Nip it In the Bud–How to Get in Front of Potential Third-Party Liabilities” webinar. He also moderated, “Emotional Impact of Racial Violence on Workplace Productivity–A Time to Listen, Learn and Act,” a webinar sponsored by the African American Chamber of Commerce of Central Florida. Posted 6.26.20

Beth Demme recently graduated from United Theological Seminary with her M.Div. and is serving as a United Methodist pastor in Tallahassee. Beth is also the host of the popular podcast, "Discovering Our Scars," available on iTunes, Spotify and other podcast platforms. Posted 6.24.20

The Honorable Tara C. Riddle was appointed in December 2019 as associate judge of the Cobb County Probate Court in Marietta, GA. Posted 2.24.20

Alicia Caridi was elected to the board of directors of the International Amusement & Leisure Defense Association and will serve as the chairperson of finance. Caridi is a shareholder at Marshall Dennehey Warner Coleman & Goggin in Tampa. Posted 2.4.20

Heather Bridwell passed away on March 8, 2019. She was active in the legal community, having served two terms as president of the Martin County Chapter of the Florida Association for Women Lawyers. She also volunteered her time in education, where she served as a judge at the annual FLRE Florida High School Mock Trial State Finals Competition and presented to students in Palm Beach County regarding trial practice. She was a shareholder at Peterson Bernard in Stuart, where she practiced in the area of insurance defense. Posted 3.18.19

Kenneth D. Pratt has been elected as the chair of the board of governors for Leadership Tallahassee, an affiliate program of the Tallahassee Chamber of Commerce, for the 2018-2019 year. He will work with other board members to oversee operations. The organization offers leadership opportunities and programs for professionals, high school juniors, and community newcomers. Pratt is the senior vice president of Governmental Affairs at the Florida Bankers Association. Posted 8.28.18

Earnest A. DeLoach, Jr. has been named general counsel of the Florida Division of Balfour Beatty Construction, a multinational infrastructure and construction company operating in the United States, the United Kingdom, Canada and Southeast Asia. Posted 7.9.18

Shannon L. Novey was selected as one of Tallahassee's 25 Women You Need to Know by the Tallahassee Democrat. She practices marital and family law at Novey Law in Tallahassee. Posted 3.21.18 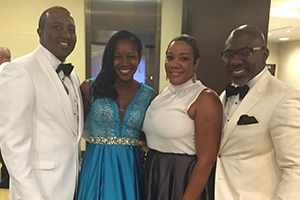 Earnest A. DeLoach, Jr. has been appearing regularly as a political analyst on Fox 35 Orlando since fall 2015. He moderated the Orange County Young Democrats Florida Senate debate, Districts 11 and 13, on May 10, 2016. He also participated in the Orange County Bar Association's "Professionalism and Civility: Stepping Stones on the Path to Success" panel on May 17, 2016. DeLoach practices at DeLoach Law LLC in Orlando. Posted 12.14.17

Michael G. Dyer was elected to the board of directors of the Florida School Board Attorneys Association in November 2016. He also presented to the Florida Educational Negotiators, an organization comprised of school district labor negotiators, on balancing health insurance costs through collective bargaining negotiations. Dyer serves as general counsel at the School District of Volusia County. Posted 12.7.17

Lieutenant Colonel John L. Kiel, Jr. was selected to serve as chair of the Department of Law at The Judge Advocate General's Legal Center and School in Charlottesville, VA. He will supervise criminal law faculty members and new judge advocate majors. Posted 12.7.17

Anthony C. Alfonso is now of counsel at DLA Piper in Miami. He practices in the area of real estate law. Posted 8.10.17

Joseph C. D'Annunzio passed away on March 21, 2017. He favored employment law, and worked both in companies and as a sole practitioner before retiring at 87. Posted 4.7.17