Richard Rivera, partner in the Litigation and Intellectual Property Practices of Smith, Gambrell & Russell, LLP in Jacksonville, has been appointed to serve as the managing director for administration of the American Bar Association Young Lawyers Division for the 2022-23 bar year that commenced in August. Posted 11.1.22 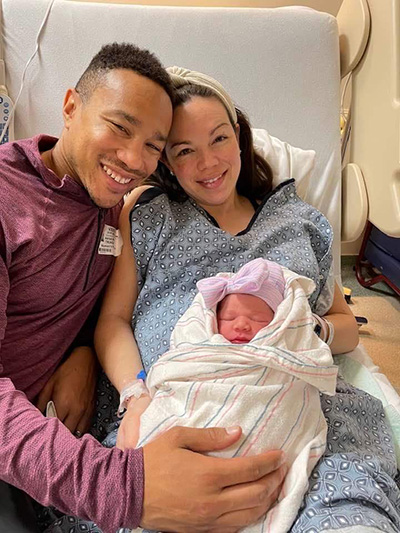 Erika J. Barger is now corporate counsel for Brown & Brown, Inc., the fifth largest independent insurance brokerage in the nation, in Daytona Beach, Florida. In addition, at the 153rd Elks Grand Lodge Convention of the Benevolent Protective Order of Elks, held in Tampa, Florida in July of 2021, Barger was installed as the district deputy grand exalted ruler for the East Central District of Florida, where she will serve a one-year term. She will be responsible for overseeing the eight lodges in her district. Posted 9.29.21

Nick Fox will begin working with Volvo on December 1 as in house counsel in Greensboro, NC. He will be managing outside litigation firms in all 50 states. Posted 11.13.20

Eric Schab was celebrated as a graduating "Class 6" member in the Legal Aid Foundation's Thunderdome Tallahassee Awards ceremony, which was held virtually on September 22. The class clocked 300+ pro bono hours over the past year. Posted 10.2.20

Joey M. Chindamo has been included in the inaugural edition of the 2021 Best Lawyers: Ones to Watch in the category of Product Liability Litigation – Defendants. Chindamo is an associate at Marshall Dennehey Warner Coleman & Goggin in Orlando. Posted 8.31.20

Erika J. Barger was named the Florida State Elks Association's "Elk of the Year" at the Florida State Elks Association's State Convention held in Orlando from May 24-25. She was selected out of 56,000 Elk members statewide. Barger received the award due to her efforts as the state chairman of the Elks National Foundation Fundraising Committee. She also serves as district chairman for the East Central District. Barger is the compliance director at Holland Financial, Inc. in Ormond Beach. Posted 7.31.19

Aaron R. Gott was promoted to partner at Bona Law PC, a boutique antitrust law firm with offices in San Diego and New York, in recognition of his outstanding contributions to the firm. Gott practices nationwide with a focus on antitrust and competition law, complex business litigation and appeals. Posted 5.2.19

Nicholas A. Fox is now an associate at Goldberg Segalla in Buffalo, NY. He focuses his practice on counseling and defending clients in all stages of complex toxic tort, environmental and asbestos litigation. Posted 4.17.19

Glenn E. Lovett was promoted to shareholder at Clark Partington Hart Larry Bond & Stackhouse, P.A. in Pensacola. He is a member of the firm's transaction department, where he focuses on business and health law. Posted 3.18.19

Adrian A. Lukis was appointed deputy chief of staff by Florida Governor-elect Ron DeSantis. He will join the DeSantis administration from his position as senior advisor to House Speaker Jose Oliva. Posted 12.19.18

Aaron R. Gott, of counsel at Bona Law PC in La Jolla, CA, was selected to the 2019 Super Lawyers San Diego Rising Stars list. He is an antitrust litigator, and represents defendants and non-class plaintiffs nationwide in antitrust and other complex business litigation. He also has a significant appellate practice, and has represented parties and amici before the U.S. Supreme Court, the U.S. Court of Appeals for the Fourth, Eighth, Ninth, and Tenth Circuits, and state courts of appeal in Minnesota and California. Posted 12.6.18

Douglas H. Dean has been named partner at Lawson & Reid, LLC in Cordele, GA. He has recovered more than $3 million for clients while concentrating his practice on auto collisions, slips-and-falls, workers’ compensation, collections and business litigation in state and federal courts throughout Georgia. Posted 7.20.18

Erika J. Barger was promoted to chief compliance officer at Holland Financial, Inc., a diversified financial services firm, in Ormond Beach. She previously served as compliance director. In May 2018, she was commissioned as a Kentucky colonel by Kentucky Governor Matthew Bevin. Also in May, Barger received an appointment as the Florida State chairman of the Elks National Foundation Certificates Committee for the Florida State Elks Association. Additionally, Barger has joined the Honorable Order of Kentucky Colonels, a voluntary philanthropic organization. She also met her goal of visiting all 50 U.S. states. Posted 7.16.18

Nelson A. Faerber, III is running for secretary of state in South Carolina. He previously served as area defense counsel for the United States Air Force. Posted 2.16.18

Gregory A. Gidus has joined Carlton Fields as an associate in the firm's Tampa office. He will practice in the Property and Casualty Insurance practice group. Posted 2.8.18

Brandon A. Steele was a guest speaker at the 2016 National Government Ethics Summit in Washington D.C., where he presented on data science. He also was elected to the board of the Federal Bar Association's Veterans and Military Law Section, and was admitted to practice before the Court of Appeals for Veterans Claims. He is the founder and chief veterans advocate at National Veterans Benefits Attorneys in Daytona Beach. Posted 12.14.17

Kevin R. Schneider appeared on Fox Business to discuss animal rights and the lifting of the trophy ban. He is the executive director of the Nonhuman Rights Project in New York, NY. Posted 12.4.17

Erika J. Barger was admitted to the Bar of the Supreme Court of the United States. She is the compliance director at Holland Financial Inc. in Ormond Beach. Posted 8.10.17

Adrian T. Mood, Jr. is now an associate at Carr Allison in their Tallahassee office. His practice focuses in the areas of premises liability, personal injury and construction. Posted 7.19.17

David W. Cannady was selected for active duty service as an Air Force Judge Advocate during the December 2016 Direct Appointment Board. Posted 2.20.17

Janelle E. Zabresky has accepted a position at Swift Currie in Atlanta. Posted 2.14.17