Kandace Rudd is now a partner at Waldoch & McConnaughhay, P.A. in Tallahassee and chair of the Medicaid Committee for the Elder Law Section of The Florida Bar. She practices in the areas of guardianship, public benefits, planning for and responding to issues arising from aging and capacity, trust administration, and probate. Posted 8.29.22

Travis Voyles has relocated to Richmond, Virginia, and accepted a position as the deputy secretary of Natural and Historic Resources for Virginia Gov. Glenn Youngkin. Posted 3.10.22

Stephen K. Varnell has joined the litigation team in the Tallahassee office of GrayRobinson. Varnell focuses his practice on general civil litigation in state and federal court and represents clients at the trial and appellate court levels. He previously served as a law clerk to Judge Allen C. Winsor for the U.S. District Court for the Northern District of Florida, for Justice Robert J. Luck for the Supreme Court of Florida, and for Judge Allen C. Winsor for the First District Court of Appeal. Posted 9.29.21

Jamie R. Tasker was named to the “Best Lawyers: Ones to Watch” list for the first time in the 2022 edition of The Best Lawyers in America. Posted 8.25.21

Lazaro Fields has been appointed to the Citizens Property Insurance Corporation Board of Governors by Florida House Speaker Jose Olivia. Posted 11.5.20

Matthew A. Margolis is now an associate at Shapiro, Blasi, Wasserman & Hermann in Boca Raton. He focuses his practice in the areas of complex commercial litigation, government law and construction law. Posted 9.23.20

Vanessa Arrieta has been selected for the Elder Justice Program, a two-year equal justice works fellowship program aimed at improving the national response to elder abuse, neglect and exploitation. Arrieta will help older victims of crime through direct legal services, outreach and education to support the socially and economically vulnerable seniors in the rural areas of Palm Beach and Hendry Counties. Posted 9.9.20

Travis A. Voyles is now the director of oversight at the Office of Congressional and Intergovernmental Relations at the U.S. Environmental Protection Agency. He manages all oversight matters within Congress, including Congressional hearings, briefings and investigations. Posted 12.19.18 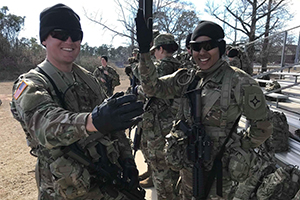 Tabitha R. Herrera is now an assistant attorney general at the Office of the Florida Attorney General. Posted 2.8.18

Catherine Ann Lockhart is now an assistant state attorney at the State Attorney's Office for the Fourth Judicial Circuit. Posted 9.6.17