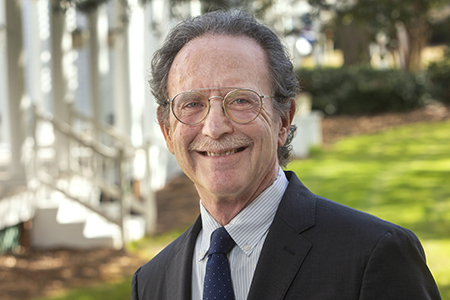 Frederick Abbott, the Edward Ball Eminent Scholar Professor of International Law, is highly regarded for his scholarship and professional activities in international intellectual property rights and global economic issues. He has served as an expert consultant for numerous international and regional organizations, governments and nongovernmental organizations, mainly in the fields of intellectual property, public health, trade, competition and sustainable development. He is co-chair of the Committee on Global Health Law of the International Law Association, having served as rapporteur for the Committee on International Trade Law from the inception of its work in 1993 to its conclusion in 2014. He recently served as a member of the Expert Advisory Group to the UN Secretary-General's High-Level Panel on Access to Medicines, appointed in late 2015. Professor Abbott regularly serves as panelist for the World Intellectual Property Organization Arbitration and Mediation Center. He is on the editorial board of the Journal of International Economic Law (Oxford) and on the editorial board of the WIPO-WTO Colloquium Papers Series, Geneva. He has served as counsel to governments in WTO dispute settlement proceedings, and in national court proceedings. He is on the panel of arbitrators under the dispute settlement mechanism of the CARIFORUM-EU Economic Partnership Agreement. He is former chair of the American Society of Law Intellectual Property Interest Group and the International Law Section of the American Association of Law Schools, and former director of the American Society of International Law Research Project on Human Rights and International Trade. He served on the panel of experts of UNCTAD’s Program on the Settlement of Disputes in International Trade, Investment and Intellectual Property, and as consultant for the UNCTAD/ICTSD Project on Intellectual Property and Sustainable Development. He served as chair of the Intellectual Property Advisory Committee of the Foundation for Innovative New Diagnostics.

Professor Abbott is the author of many books and articles in the fields of international intellectual property rights law, public health, international economic law, competition law and international law. His books include International Intellectual Property in an Integrated World Economy (with Thomas Cottier and Francis Gurry) (4th ed. 2019), Emerging Markets and the World Patent Order (editor with Carlos Correa and Peter Drahos)(2013), Global Pharmaceutical Policy: Ensuring Medicines for Tomorrow’s World (with Graham Dukes) (2009), UNCTAD-ICTSD Resource Book on TRIPS and Development (principal consultant with Carlos Correa)(2005), The International Intellectual Property System: Commentary and Materials (with Thomas Cottier and Francis Gurry) (1999), China in the World Trading System: Defining the Principles of Engagement (ed. 1998), Public Policy and Global Technological Integration (ed. 1997), and Law and Policy of Regional Integration (1995). His book on treaty-making, Parliamentary Participation in the Making and Operation of Treaties (1994), edited with Stefan Riesenfeld, was awarded the American Society of International Law Certificate of Merit.

Reflections on the Report of the UN Secretary General’s High Level Panel on Access to Medicines, 22 Ciência & Saúde Coletiva 2440 (2017)