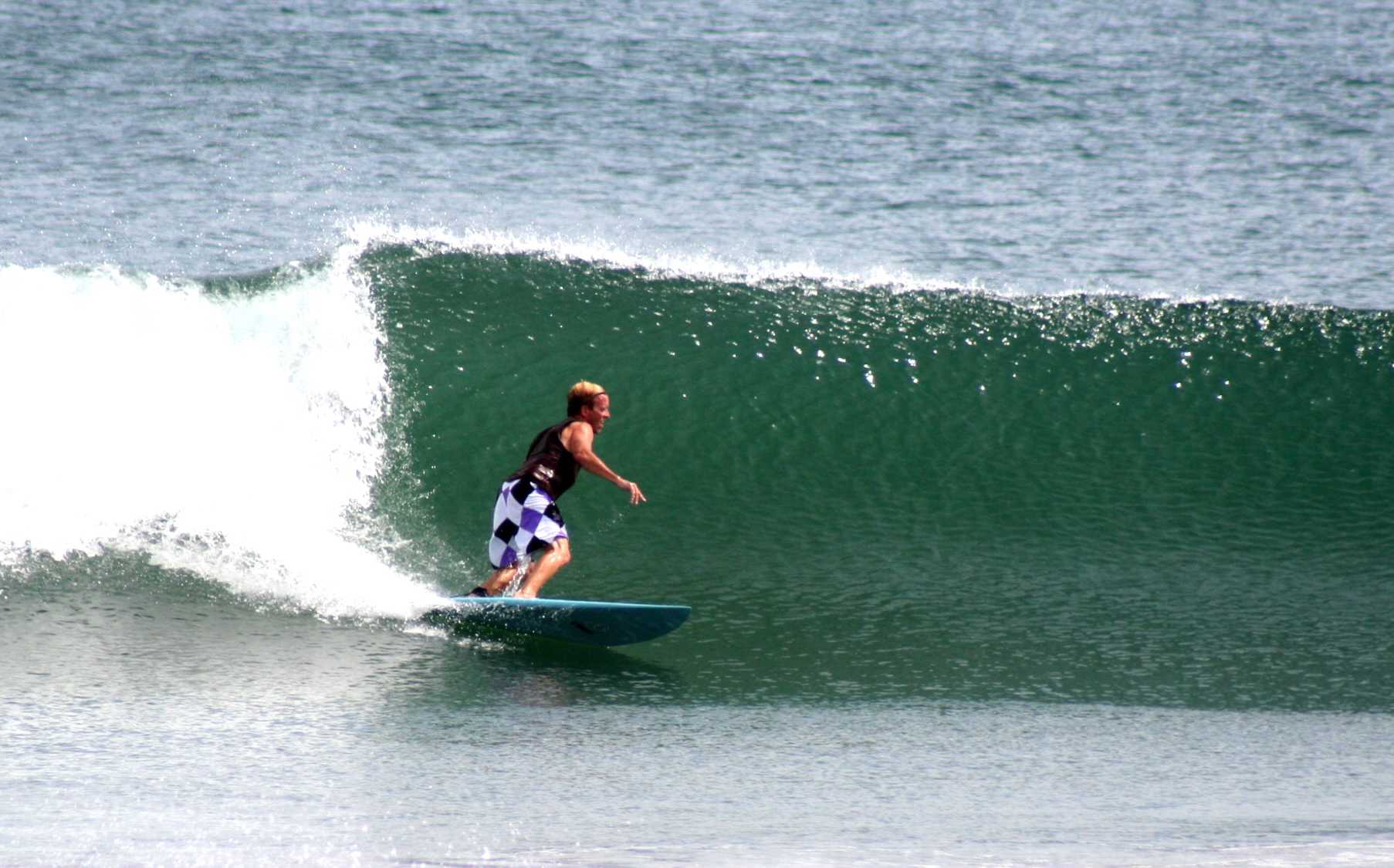 Venturing Beyond the Law: Surfing big waves, educating children about American history, and eradicating cancer are just a few of Riley Allen’s passions. In addition, Allen has fervently advocated for thousands of clients during his 30 plus-year law career.

When entering the Orlando offices of Riley Allen Law, the décor is the first hint that it is not a typical law firm. Bright metal artwork hangs from the ceilings, the staircase railings are painted a vibrant turquoise, shiny ductwork is exposed, and the light fixtures and furniture are streamlined and bold. The conference room tables are purposefully round so that no one sits at the head of the table.

Allen, a 1981 College of Law graduate, strives to be creative and fearless as he battles huge companies during the representation of his clients.

“We’ve always handled David and Goliath cases, where it would be me, or me and a buddy, and we’d walk into a room and there would be 20 lawyers on the other side with all of their assistants,” said Allen about his complex civil litigation practice. “As much work as that takes, it’s just the way I’m wired. A lot of people think I’m crazy, but I can’t help it. We just do it to try to help – to give a voice to those that otherwise wouldn’t have one.”

Allen’s approach has garnered more than 60 settlements or verdicts in excess of $1 million. Because of his success, Allen has received numerous law-related honors, but he is most proud of his work as a legal guardian for abused and neglected children. As a result of his service, in 1997, he was the Orange County Bar Association’s first-ever recipient of the “Guardian ad Litem of the Year Award.”

“My first year I had 12 or 13 kids,” said Allen, who had been a juvenile counselor. “And I’ve had about 75 kids over the years and that is the most important thing I’ve done as a lawyer. That’s what I encourage others to do because it’s so needed and you get so much out of it.

Allen, who considered medical school before choosing a career in the law, has long been involved in the medical field. As a principal in TPEC, The Tumor Project to Eradicate Cancer, Allen and his partners are fighting against America’s second-leading cause of death. The group includes some brilliant scientists, one of whom previously worked for a large pharmaceutical company before his projects were shelved despite making significant headway. TPEC negotiated for the rights to one of the shelved projects.

“We’ve been working on it for several years and we’ve made a lot of progress,” said Allen. “We figured if we were going to do it, we’d start with the worst cancerous tumors out there, which arein the brain, known as glioblastomas. I don’t like to get ahead of myself, but we’ve made phenomenal progress in the laboratory setting with mice, rats, pigs, and most recently dogs. We excise brain tumors and then we apply this patentpending formulation that we created. If we’re successful, this is life altering. When you look at the application of this drug to these cancerous tumors, it eradicates them. It’s just mind blowing!”

Allen also is CEO of RBC Medical— a medical technology company that works to develop and distribute state-of-the-art products — and is a principal in Physicians’ Pharmaceutical Solutions – a company that provides innovative treatment solutions for chronic and acute medical conditions. He also is a principal partner in developing a revolutionary, patent-pending, expandable spinal surgical cage that allows the patient to maintain range of motion often lost after spinal fusion surgery.

One of Allen’s newest ventures is not a medical project, but one that aims to teach children details about American history that are missing from their school books. Through The Freedom Kids project, Allen and three former clients are writing novels that explain how faith guided many of the founders of the United States of America. The novels are about four young people who travel back in time with their middle school teacher and meet various people from throughout American history. Allen anticipates that the initial 10 stories that are written could be available for purchase this year.

“The Freedom Kids is the other side of what you are taught in school. I get separation of church and state, but it only tells half the story when you are in public school and you have no idea what really was motivating people and how they felt they were guided and what they felt their obligations and duties were because of their faith,” said Allen, whose own faith has been a guiding force for this project and everything else in his life. “It tells the stories in a way that we hope will help kids retain the
information.”

While Allen thoroughly enjoys writing, his first passion is surfing.

“I love it because it humbles you and you have a lot of time to think and to reflect on what’s important,” said Allen, who has traveled to destinations including Australia, Costa Rica, Hawaii, New Zealand and Nicaragua to surf. “You realize from the power of the waves, especially if you are surfing in big waves, you could die each time that you are in that environment, so you do a lot of praying to survive. But I love it and it’s beautiful.”

Allen’s three sons with his wife of 25 years, Mary Faith, all grew up surfing with their father. Dalton, Chase and Troy also learned to love sports through their father, who has coached many of their various athletic teams. When the family traveled to Hawaii for Mary Faith’s 50th birthday, Allen convinced
his wife get on a surfboard.

One of Allen’s favorite quotes is: “The greatest use of life is to spend it for something that will outlast it,” by William James.

Through his family, work and other passions, Allen’s life, undoubtedly, already has had a profound and lasting impact on others.

As printed in the spring 2015 issue of Florida State Law magazine.